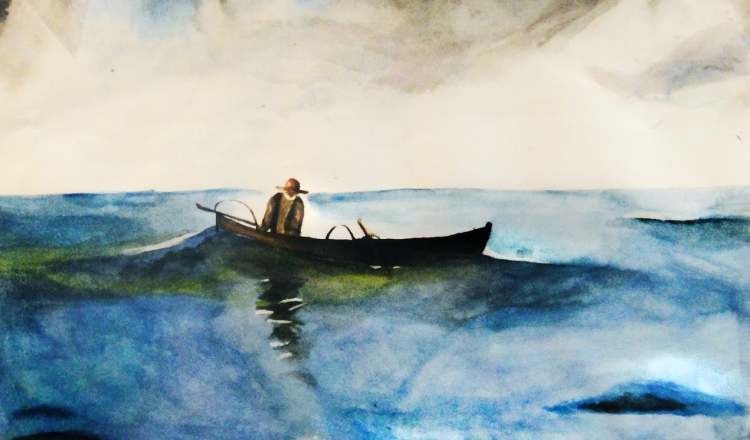 The Witch, Old Man and the Fishers

Buy This Book - $14.00 + Shipping
Neil Garvie reads his poem, The Witch Old Man and the Fishers, from his first book of poetry about the environment, Silence Craves a Voice.

The sea is a placid old man, spending time in salty sleep
he’s been blind before memory began, preferring the dark and the deep
but his wife, that witch of a wind, on the surface lurks about
she acts as her old man’s eyes — for thieving fishers looks out

The wind is subtle and stealthy, at first a wispy figure, unseen
then, without much of a warning, she’s hissing on top of the beam
she’s jealous and quick to anger — fishers shouldn’t be overly bold
as she circles their tiny boats to inspect what’s in their hold

If the wind finds fishers are stealing from her old man of the deep
she’ll call him up, churning his chops, she’ll wail and moan and screech
“Wake up! Wake up, old man! Up top where poachers sneak!
Wake up, old man, to stop them!” you hear her frantic shriek

Then, what a transformation, the old man, in ill-tempered mood
rises to a white-capping rage, “How dare you take my fish for food!”
on his own the old boy is harmless — the wind brings the worst out in him
she whips him into a frenzy — fishers fear most when he’s grim

Together the two churn wild gales, surging waves and swells they flash
unrelenting against thieving fishers, intent to punish and smash
the wind and water do their worst, they’re deaf to any fisher’s plea
there’s little one can do when caught in such a raging sea

So it’s been since time began — tension between the three
the wind and the sea and the fisher — each has a role, they agree
for the witch and old man are a couple, Mother Nature’s guardians be
they’ve existed since the beginning of time, forever the wind and the sea.